How states and schools are stepping up to fight cyberbullying

If 93% of school-aged children in the US are online,

and between 37% and 59% report having been bullied or harassed online;

out of 10 students, how many will likely be bullied this school year?

If you answered 3 in 10 students, then sadly, you are correct.

If you have a question or would like to arrange a free demonstration of any of our solutions please contact us. We'd love to help.

The introduction of technology has allowed schools across the country to provide access to a world of information that was once limited to textbooks and library resources. However, through this expanded access to information, we have also encouraged the increased connectedness of students. In an ideal world, the resources provided would be used for the betterment of themselves and the world around them. But history has shown that humans can be cruel; finding ways to abuse tools such as those meant for learning, connection and engagement in an attempt to undermine or even demean others.

This connectedness provides bullies, who are often driven by insecurity, additional opportunities to use abusive behavior to feel empowered through threats that they suspect will go undetected, based on 81% of students saying that they feel it is easier to get away with it since “those that see it tend to ignore it”, according to a Pew Research Center article on Teens and Mobile Phones.

This growing epidemic impacts students, schools and communities in a number of ways. Students that have been bullied report being impacted report skipping class (20%), having suicidal thoughts (26%), and event developing depression (37%), as noted in the Digital Label’s 2017 Annual Bullying Survey.

As work continues with parents and local communities to help to impart the value of being a good “digital citizen” through education and example, schools must add the ability to identify instances to act in the interest of keeping students both mentally and physically out of harm’s way.

School districts are not alone in the fight to prevent cyberbullying. Resources are being made available in the form of dollars, definitions, and threat detection tools to aid the efforts.

How States Are Stepping Up

While the state of Georgia became the first state to pass bullying legislation, which required schools to implement character education programs that explicitly addressed bullying prevention, California was the first to pass a state law dealing directly with cyberbullying in 2008. Every U.S. state has since required school districts to develop and implement bullying policies, with all but Alaska addressing cyberbullying or online harassment explicitly.

States with the most comprehensive cyberbullying related legislation include Arkansas, California, Connecticut, Massachusetts, and New Jersey. Despite enacting laws, some of these states still top the list for the percentage of students being victimized by cyberbullies.

While some states still lag when it comes to passing cyberbullying related legislation, debate on the topic is far from absent from the legislative floor, often as part of the larger cybersecurity discussion.

Ways for schools to watch

According to a survey by the Cyberbullying Research Center of over 15,000 student respondents, 83% of those who had been cyberbullied had also been bullied at school.

As educators and administrators, we want to use every resource available to identify incidents before they escalate to an IRL (in real life) situation. Today’s school cybersecurity software offerings like threat prevention and web filtering programs do just that.

Here’s how each of these solutions work:

Filtering and scanning are still in effect whether students are using school-issued devices or through software managed by the school, whether on-campus or offsite.

How to pay for prevention

With so many school budgets already strapped for cash, the question is not if we want to do everything possible to prevent cyberbullying, but how we pay for the resources to help us do so.

Educators are currently appealing to the FCC to increase the dollars spent per student as part of E-Rate funding in order to increase security measures of these now “super connected” schools. However, many districts don’t have the time to wait on deliberations that may or may not return the decision that favors schools.

For those looking to take a more active role, we at Smoothwall have put together a guide to funding school cybersecurity that provides alternative funding opportunities as well as ways to stretch existing federal and state funding to incorporate approved programs that work to work on your school’s network and the devices accessing it. 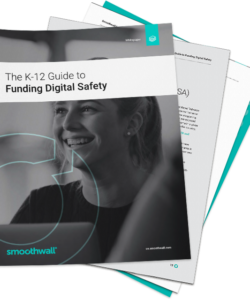 Learn the key signs that suggest your web filter wasn't made for education. Find out more.

What is threat detection technology, how you can use it to reduce school violence, and how to integrate it into safety plans.

Research from The Child Mind Institute suggests it is. This article explores how social media impacts students and what we can do to help.