My secret family: Decoding the secret society of self-harm

You may think you know your students, but what if they started talking about a “secret family” online?

Most would think of a group sharing a common interest. The reality is, most of these “secret families” are being used to share their self-harm on social media. This phenomenon is known as Nonsuicidal Self-Injury (NSSI).

A study by the Centers for Disease Control (CDC) discovered a popular image on Instagram that described the broader community of NSSI and mental illness, called #MySecretFamily. The image uses hashtags with names that are coded for mental issues and disorders such as #Ana for anorexia, #Dallas for Suicidal, and #Ben for Borderline (borderline personality disorder). It’s important to note that these hashtags go beyond names, they also include what looks to be misspelled or altered words such as #Thynspo.

If you have a question or would like to arrange a free demonstration of any of our solutions please contact us. We'd love to help.

Not only do only are teens using ambiguous hashtags in their text, they are also sharing images and videos of their self-harm through them. The CDC found term #MySecretFamily had more than 1.5 million search results on Instagram alone. Only one-third of the relevant hashtags generated Content Advisory warnings. Although social media platforms are regularly regulating content, the secret hashtags are increasing and creating communities.

The threat is more than a hashtag

In a time where viral social media challenges are increasing in quantity and apps like TikTok amplifies voices – both good and bad – the coded NSSI messages become increasingly difficult for social media companies to scan and promptly remove.

Although many self-harm communities are meant to provide support for those suffering, it has also turned to normalize and build upon existing NSSI ideation by sharing methods of NSSI or sharing how to conceal self-harm.

What should schools and parents look out for? Not all expressions of NSSI are direct. Self-harming young people that take part in NSSI may use typos of words that would otherwise create a flagged concern.

In addition to typos, the My Secret Family NSSI phenomenon uses coded names – thus building the secret family – related to mental illness as hashtags or as part of the normal text that may reveal more than what meets the eye. Below are a couple of known hashtags and code names to look out for on social media:

What can we do?

With the use of technology in today’s education, not only are young people more exposed to NSSI online communities, but it also increases the opportunity for intervention and prevention. While NSSI doesn’t necessarily mean there is an actual risk of suicide, intervention is extremely critical to identify troubled students and prevent escalation.

Building solid prevention, intervention, and support systems will make it easier to detect and support students in need. With technology, it’s important to have a threat prevention solution that can be easily customized to detect keywords and phrases. 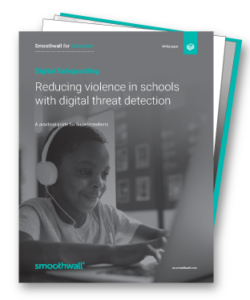 A Complete Guide to threat detection technology for Schools

With an increased safety risk being posed by digital technology, discover how threat detection technology and filtering can protect students' safety.

What’s actually happens to students when they are stressed over standardized testing? Read about the effects of test stress on students.

Research from The Child Mind Institute suggests it is. This article explores how social media impacts students and what we can do to help.